WorldSkills Kazan: Tips and tricks for the world championship

Putting skilled people in the spotlight and showing how important they are for our economic output- that is exactly what the WorldSkills Championship Initiative is committed to do. Every other year, there is a very special world championship across 52 professions. For this purpose, young people from all over the world gather together to win one of the precious medals for their skill (i.e. for their profession). The competition is carried out across many fields, from CNC milling and turning to painting and floristry as well as beauty therapy, to name but a few. Participants present their profession and their country. 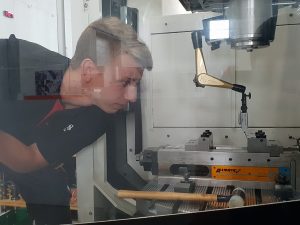 In 2019, ALLMATIC also took part in the championship, carried out in the Russian city of Kazan, as fully committed as a member of the German team led by Tim Baur. “To us, the clamping device experts are an important knowledge partner; every little thing counts,” says Patrick Aiple, who coaches Baur in the “milling” discipline. “If you clamp the  workpiece wrongly just once, it’ll get smashed.” It is an honour for the specialists from Unterthingau to support the team in word and deed. “ALLMATIC has not only made excellent material available but has helped us with many tips and tricks for how to clamp workpieces correctly and thus save precious seconds,” says Aiple. “In this competition, you have to give your all. Once you make a mistake, you won’t get a second chance. There is always very little time.” Tim Baur made 13th place and because he scored so many points, he got a “Medallion of Excellence” in addition.

“Having good partners is important to us,” points out Herbert Mattes as well. He is the training manager at the CHIRON Group in Tuttlingen, Germany, one of the world’s leading specialists for CNC-controlled, vertical machining and turning centres. It was Mattes who brought WorldSkills in milling to Germany. Since then, his employer has been the main sponsor of the German championship and his younger colleagues have been taking part in the competition regularly. “However, this is not a CHIRON event. Anyone can apply and everybody has a chance to win,” he emphasizes.

“A good apprenticeship is so important but learning how to clamp has often not been given the priority it deserves,” says Bernhard Rösch, CEO of ALLMATIC. For that reason, his company likes to use platforms like WorldSkills to push clamping devices further into the spotlight. “Our entire team was rooting for Tim Baur and we rejoice with him for achieving such a good result.” However, to ALLMATIC, supporting the German participant in Kazan was not the only campaign to lobby for a closer look at ‘their topic’. Learning how to correctly clamp a workpiece and to understand how important that step is in the workflow, that’s exactly what ALLMATIC wants all apprentices to take home from their training classes. Together with their own apprentices, the company developed an e-learning platform of their own; it is designed for entry-level workers in metalworking professions. Even the Chamber of Commerce and I 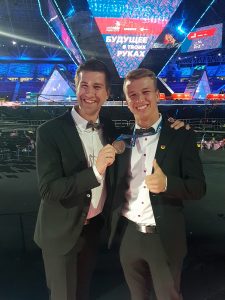 ndustry in Swabia is excited about the tutorials and explicitly welcomes classes for such skills.

“In Kazan we were able to perform so well, partly because we worked together so well with the  clamping technology guys,” says Aiple. He can evaluate the performance of his charge very well since he himself took part in the same competition five years ago, to become the German champion. Furthermore, he has been the runner-up for the European  championship since 2016.

Always stay up to date

Subscribe to our newsletter and receive news on the topic of clamping, tips on the use of our machine vises and all innovations to our products.